Not as ‘tyring’ as first thought

As I ran the 13.1 miles around Birmingham with 20,000 fellow runners I was almost continually asked the same two questions. Are you ‘tyred’ yet? and “Why are you carrying a tyre?

I politely answered the first question with the words “good one” but as the race went on the answer I wanted to give was “tied of hearing that joke”. That said the support from fellow runners as well as supporters and marshals was totally amazing. The short answer for the second question was that I was attempting a world record. There was a lot more to it than that though.

It has always been my ambition to break a running world record. Growing up as an 800 meter runner I had my sights set on Wilson Kipketer’s long standing record but David Rudisha beat me to that one and although I was a nation standard track runner, now in my thirties and concentrating more on obstacle course racing the dream was long gone so I’d turned my attention elsewhere.

In March I had a go at the ‘Fastest marathon dressed as a postman’ record but that went horribly wrong (https://chrislambracingdiary.wordpress.com/2015/03/04/world-record-attempt-fastest-marathon-dressed-as-a-postman-010315/) so I decided to bring two of my best talents together.

I’m still a pretty strong runner but prefer the longer events now and I’ve found since taking up OCR I work well on the carrying tasks. My club, Parklands Tough Running have a mascot named Tarquin the Tyre so it seemed like a good idea to go for the world record for ‘Fastest half marathon carrying a car tyre’. I entered the Great Birmingham Run then headed over to the Guinness World Records website & applied for what would be a new record. (I thought this would mean I’d just need to finish to set the feat, how wrong I was).

I waited anxiously for 12 weeks and just as I thought I wasn’t going to get the attempt verified in time, 3 days before the race, a conformation email dropped into my inbox.

The strict guidelines set meant that I had a lot to do and little time to do it. Lots of paperwork, rules and stipulations were standing in the way. Firstly a very tough minimum standard time of 1:40:00 had been set. Having only ever ran 5k at a fast pace carrying the tyre I wasn’t at all confident this was going to be achievable but I’m not one to swerve a challenge. Secondly I had to find two willing witnesses to run alongside me for the entire duration of the attempt. Luckily the two runners I coach full time were both more than capable, ready and willing. I then had to weigh and measure the tyre.

The rules stated a minimum weight of 5 kg and a diameter of 40 cm. Tarquin was 8 kg with a diameter of 54 cm. I considered finding a smaller, lighter tyre but I was running out of time and it just didn’t feel right. I knew it was a decision I could live to regret but race day quickly arrived and there was no going back.

I’d put my PB down on the entry form so I was in the elite starting wave which meant I avoided any congestion from the mass field.

The target pace was 7.35 per mile which I knew I’d be ok with early on but fully expected things to get harder and harder as the extra weight began to wear me down.

We started slightly too fast with some 7.20 miles before settling down into a 7.30 paced rhythm. This was quicker that the planned pace but felt comfortable. After some sharp corners the course took us away from the city centre and up the first of the inclines. The pace slowed a little but we were still on target and the down hill that followed quickened the pace up again.

The next few miles backtracked the straight we’d already ran down so gave an opportunity to view the thousands behind us. During this period I looked out for the many familiar faces I knew who were also taking part from my club, one of whom was my Dad who I spotted was shouted some words of encouragement to. This offered a welcome distraction allowing me to forget about my watch and just run.

We then reached 10k where there was a mat for the chip timing to record us. I’d gone through in 46:06 meaning I was just over a minute ahead of schedule but more importantly feeling very relaxed and confident. 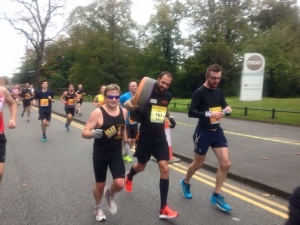 As we passed through Edgebaston cricket ground I was overtaken by a man dressed as a cow. “He’s ‘mooving’ well” I joked. I just couldn’t help myself. I felt I was entitled to that one considering the amount of times I’d heard a tyre related pun. He didn’t pull away though as my pace was increasing all the time too.

Coming into the large park at the 10 mile point we worked out that I could afford to run three 8:30 miles and would still achieve the record. We’d only gone over 7:30 once so far and that was on the hill. Not wanting to get complacent and knowing I still had a hill that the great Haile Gebrselassie described as the hardest in any half marathon he’s ever done we weren’t celebrating just yet.

As the hill reared it’s ugly head I was feeling strong. I pushed hard and much to my surprise didn’t drop the pace at all. The job was almost done and now it was about putting this record out of sight for anyone else that ever wants to attempt it. I wanted to make sure it wasn’t going to be easy to break by any means.

I put in a 6:20 final mile and although I was able to really enjoy and savour the home straight in front of the huge crowd I kept pushing to the finish line at well under six minute mile pace. I held the tyre aloft and stopped the clock at 1:35:58, over 4 minutes inside the world record guidelines. I was over the moon.

To top thing off I was approached by the legendary British distance runner Brendan Foster who offered his congratulations and then interviewed by ITV news.

It had been a great race where almost everything had gone right. I’d like to say a massive thanks to my good friends and expert pacers/ witnesses Steve Heighway and Pete Currington who helped me every step of the way. Running along chatting almost the entire way took my mind off the pain on my shoulders and Pete’s encouragement in the later stages made the difference in terms of the amount I broke the record by.

Check us out on Strava

We provide you with the latest fixtures, results, and running news here on Run Republic
Contact us: info@runrepublic.ie

Install this Run Republic on your iPhone

and then Add to Home Screen